SAVE even more this Summer

Take advantage of our Start of Summer Super Solar Sale.

Fill out the form below to start your Summer with Savings.

What is the Victorian Solar Rebate?

The Victorian State Government have committed themselves to the affordability of household energy. The Solar Victoria Solar Panel Rebate Scheme aims to help households to install solar technology on the home to reduce growing energy bills.

Under this new rebate scheme, 650,000 eligible households can save 50% OFF* the price for installing a new solar system in their home on top of the federal STC rebate.

Sunbank Solar (with the largest installer network in Victoria) has created an exclusive Priority Install Program for any Victorians to secure the full Government rebate, guaranteeing that you will be installed in time to assist in claiming this rebate.

*Terms and Conditions Apply. Must meet eligibility criteria to receive the Victorian Government Rebate. Rebate value up to $1,888.00. Summer Solar Sale expires 6pm EST, 31st January 2020. Not available in conjunction with any other offer. Suitable residential properties only. Includes standard installation. Any additional extras including but not limited to double story, meter box, travel charges or 3 phase power may attract additional charges. Products may vary to those pictured on this page.

See how Michael benefited from the rebate! 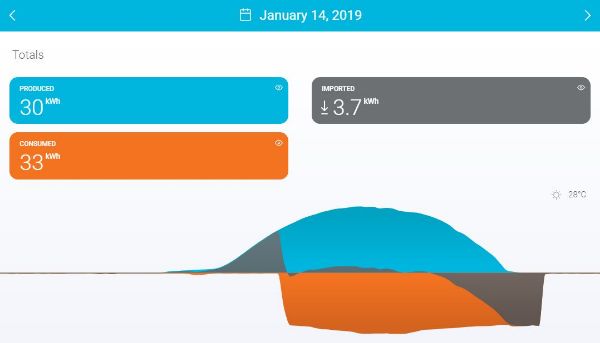 Diagram (above) shows energy produced by solar in blue, energy consumed by the household in orange and energy imported from the grid in grey.

Michael from Berwick, Victoria installed his 5kW solar system as part of the rebate and is reaping the fantastic rewards of using the sun to power the home. On January 14 2019, his solar system generated enough solar to power the home during the day and in the evening only imported 3kWh from the grid.

If Michael didn’t have solar, he could have been charged up to $15.35* for the day’s usage.

Because Michael had solar, he was only charged $1.39* for the day’s usage. The rest is free.

By installing with the rebate, Michael claimed the $2,225 rebate on his installation, practically halving his payback period of the system, and with his energy management software, Michael can monitor the system throughout the day, to give him the information he needs to minimise energy bills, and you can too.

*Based on a rate of $0.4650c/kWh when importing energy from the grid. Used only as indicator, individual rates may vary depending on energy provider. Name has been changed for privacy reasons.

Installing your solar isn’t an easy task – that’s why we hand-pick and train our installers to not only do the job, but to do it well. All our technicians and installation teams that attend properties and install solar are accredited by the Clean Energy Council for solar designs and installations. All technicians are then required to complete regular training and professional development to ensure that installers are up-to-date with advancements or changes in the solar industry.

Josef, Melbourne
“Thank you Sunbank . I have first contacted Sunbank Solar second week in January 2018 and to my supprise battery was installed two and have weeks later. I was very impressed with installers. They have done most impressive job, spotlessly cleaned all space after them and they even used rake to sweep garden. All communication with company was very professional and I can highly recommend this company to everyone who is after solar panels or battery installation.”

Margret, New South Wales
“From the first initial contact by phone with Robin, who was very helpful in explaining the process, our battery was installed within a week, which was much quicker then originally expected. Everything has run smoothly and am looking forward to a continued high standard of service from Sunbank Solar.”

Solar Power to the People!